We analyzed Resident Evil 7 Biohazard, title that is not only one more delivery, but it is a new proposal that returns the most famous saga of Capcom to its origins.

Regarding all the news about the new Resident Evil 8: Village, we do an analysis of what was Resident Evil 7 Biohazard. From the beginning we highlight this title as the resurrection of a saga that with its last deliveries didn’t convince, mainly for changing the Survival Horror for an Action & Shooting game – it was the most criticized by the gamers -. However, with the seventh installment we enjoyed that survival horror again, the reason why we became fans of the saga. Today we make a analysis of Resident Evil 7 with much satisfaction, since it is a new restart that satisfies us.

If we could define Resident Evil 7 Biohazard in one word, it would be: Terror. It was with Resident Evil 4 that the series took a turn it should never have taken, and now it has been reversed with this new release. At first it seems that nothing happens in the universe of Resident Evil. However, as we go deeper into the game we realize that Capcom made the saga return to its roots.

We live again the terror that was removed from the saga with RE4. There are many factors that relate this delivery with the first. Factors that make to remember episodes of terror as our escape from such Nemesis in RE3. The terror returns for this delivery and in a big way, in every space that we explore we do it with caution and we no longer have with us two machine guns, a rifle, two shotguns, 4 grenades and a missile launcher. We have to face relentless enemies with few resources and in every room we have to check that we do not leave anything important, as there is a shortage of ammunition, weapons, and tracks.

It is not the same to solve a riddle with a whole arsenal in our power than to solve it without ammunition while an enemy that seems indestructible follows us. Riddles are part of the success of the saga, and it is that having to spend one minute looking for the solution to a puzzle to get another room in which we find more clues and continue weaving a story -which is also interesting-, is one of the points that we liked most of this RE. With each new puzzle we find new episodes of terror in which many times for lack of weapons we must flee from enemies to face them later.

The history of RE7 is not very complex, but it is full of mystery. The protagonist and character we play with is Ethan who one day receives a very mysterious email from his partner Mia who has not heard from him for three years. This e-mail with his partner’s signature informs him that he is in the Baker house, without further ado Ethan comes to the call. In the first instances at the Baker mansion we realize that Mía is kidnapped and that she is behaving more than strangely.

Stranger than Mia’s behavior, it is a series of events that make Ethan a hostage and in turn a guest of the Baker family -this is where the psychological and disconcerting terror comes into play. These are not only strange events but also bloody and extremely strong scenes that can affect the most sensitive.

The family that receives Ethan is not at all nice, it is terrifying and bloody to say the least. It is made up of Jack Baker who is the head of the household, his wife Marguerita, Lucas his son, and the cherry on top of the cake: an old woman in a wheelchair whose behavior is very scary because of her lack of actions. It is possible that she is the grandmother of the family, and during the game another member of the Bakers will help us, Zoe, who seems to be the sanest of the family or the only one who is not a psychopath.

That’s basically the plot of the Resident Evil 7 Biohazard, a plot that is not complex, but is mysterious and even more terrifying. No doubt it is a gripping story that, being full of mysteries, makes us want to know even more about what we will find when exploring a house full of terror. A house in which many things puzzle us, such as Mia’s behavior or the staging of the family dinner. 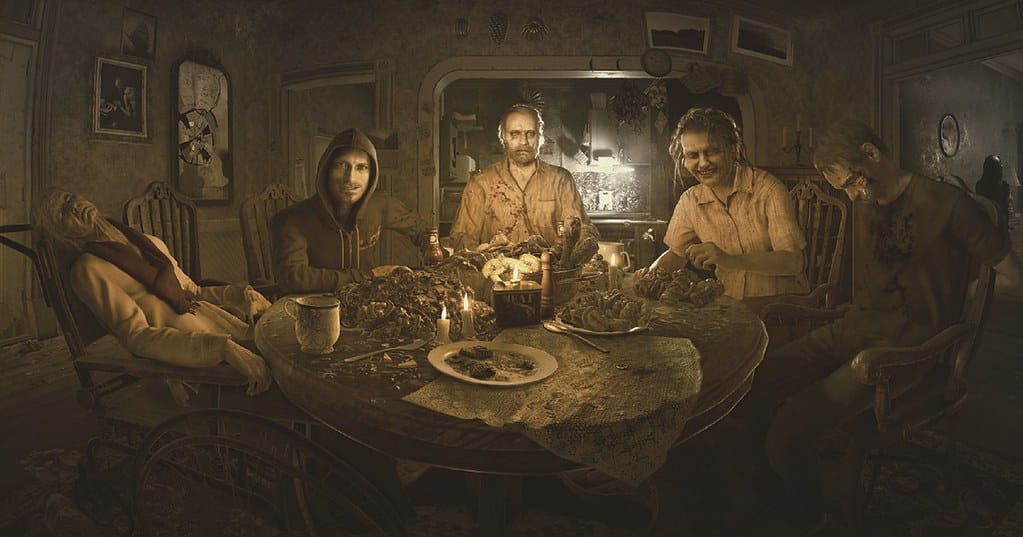 With the familiar scene that we could see in promotional videos of the game, Capcom starts strong and without any hindrance. This dinner is a clear message that this is a Resident Evil created for those of us who weren’t happy with the last action-packed installments. Capcom makes it clear that it’s not the same anymore. They really manage to bring Survival Horror to this new era of gaming by taking advantage of the power of the consoles to create scenes that influence terror in the players.

The familiar scene was meant to end in a carnage, where the injured party was going to be Ethan. However, things turn out relatively well for the protagonist, relatively well because he has not died. Now Ethan is in Strong, locked in a house with several psychopaths led by Jack Baker, who will be like a Nemesis to Ethan.

In the nightmare adventure Ethan embarks on, he begins a little introduction. From the first moment we must use Ethan to decide which way to go or not. From that moment on, the mystery of Resident Evil Biohazard stands out. The mystery is a key to the success of this title. The protagonist is left alone and with more questions than he had before arriving at the Baker mansion.

We must unravel all the mysteries and secrets of Baker Manor and its surroundings. Little by little these mysteries are solved and we get to know what is going on in this terrifying house. Thanks to all the doubts that happen since the arrival of the email and the way we are solving each question, we can say that the people of Capcom handled well the development of a plot full of mystery. It is a game that marks a before and after in the saga.
For those who have played Resident Evil since its inception, they know very well that being focused is key to achieving the objectives. Especially when it comes to finding clues to get out of a room. In this new installment we must return to be players focused on all actions to be taken in each room and calculate well before taking the next step. In addition, the puzzles are another factor that requires our concentration in a chaotic mansion.

In the previous deliveries with only having a weapon in hand we had the possibility to break through and we did not have to focus much on the clues. Those were easy deliveries, the only difficulties were the bosses or a horde of zombies. We didn’t need much concentration unless we got an occasional riddle. In this new delivery full of mystery and scarce resources we must concentrate to the maximum to access the next room and in turn unravel what really happens in the Baker house.

In Resident Evil 7 Biohazard we must be attentive to everything that happens and explore every corner of the scary Baker house. Just like in the first deliveries we will be facing situations where we find a key to a door that we tried to open hours before. That is to say, we must work and work hard to achieve our goals. In RE7 we must suffer with each scene and it will remind us games like Dino Crisis, Silent Hill or the first deliveries of this saga in which we even spend days to access a new scenario.

In this new delivery we must be centered and focused players in every thing that we read or that happens. Even analyze decorative elements in a maze full of mysteries.


We have described what makes Resident Evil 7 such a great title: mystery, good plot, terror and concentration. Although we haven’t described the difficulty, in RE7 it doesn’t matter if you’re a veteran player or a rookie. For anyone the game is difficult, even in Normal Difficulty. – We couldn’t overlook how difficult it is to face all the challenges within the Baker mansion-.

To begin with, we must keep in mind that Ethan is not very good with weapons. </That’s a point for Capcom for bringing reality to the game. The difficulty is increased by not having a military man or a mercenary to fight the Baker family and the other enemies we find in the house. Yes, it’s not just about fighting the psychopaths. We must also eliminate monsters that begin by being small bugs. Over time we will face bigger bugs with different abilities. 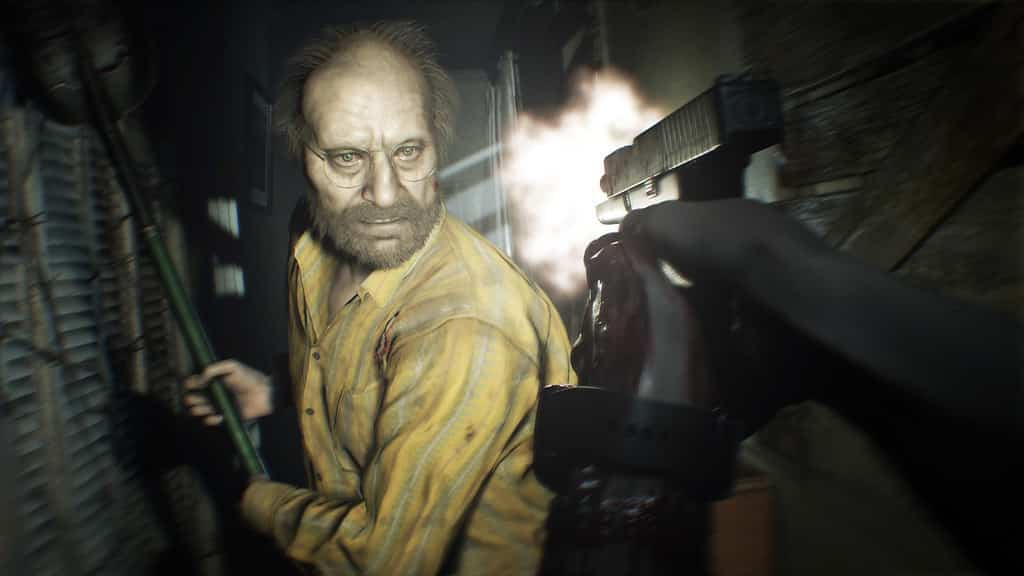 As with deliveries 1, 2, and 3, in RE7 we must clean zones, while exploring expectantly that a new enemy may appear. In many times we don’t have weapons to fight enemies, so we must use what is within our reach. The intensity of facing enemies is high and during our adventure we want to find rooms where we can keep game and be sure of all the chaos that offers the Baker mansion.

We will face different bosses in the Baker mansion. The negative point for Capcom in this delivery is that some of these bosses usually are not memorable and it seems that they appear only with the intention of reminding us that these types of enemies exist. Also some of them have very simple patterns that we can use to get the victory. There is the weak point of RE7 and it is that some bosses simply seem to fill the main frame.

The difficulty of Resident Evil 7 Biohazard is also in knowing how to combine the elements and resources that we find in the journey.

The difficulty is not only in the enemies or the lack of space, but in the riddles that in some moment we will not be able to solve. If we don’t read the documents we’ve got well – again concentration and our attention to detail come into play – the puzzles become difficult.

The general difficulty of the game is reduced by having checkpoints before facing a boss. This means that if we lose, we appear in front of their door. However some of these checkpoints are removed if we play the game in the Crazy Difficulty which is unlocked at the end of the Normal difficulty.

In Asylum mode not only we won’t have some checkpoints before facing a boss. In this mode we won’t have the same amount of ammunition either and the enemies are usually much more difficult. Even in this mode we must save the game using tapes, which are limited, – so we did in the old school with the first deliveries-.

It has seemed to us a game that returns to the saga to the path of the success. We conclude that Capcom is one of the few video game developers that manages to please their fans. We asked for Resident Evil to be a Survival Horror again and they gave it to us -with fresh air and a change of camera.  We were satisfied, and despite some details like the bosses that do not end up convincing. It is a game that ‘strong’ fulfills the objective of attracting us back to the ‘saga’, to the point of waiting for the next delivery.